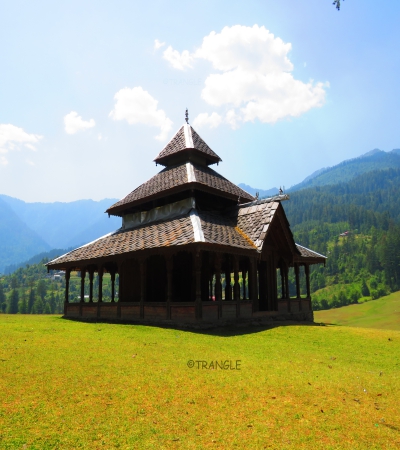 It’s rightly said,” It’s better to see something once, then to hear about it thousand times.”

I have been hearing a lot about a place called Shangarh from my friends who belong to Himachal and the place was in my to do list from a very long time. The pictures and the posts I saw on social media and internet made me ever more eager to visit the place and witness the beauty. I along with two more friends of mine, got a chance to finally visit this place when I was in Himachal for a project in the month of June.

We started at 5 am from Naggar and reached Shangarh at around 9 am. It was just the right time to begin our day as the sun was shining bright and was spreading joy all over. Not only for us but also for the village kids who were rushing to school all decked up. Though some of them stopped while I posed for the camera and joined me for a click too. We were mesmerized with the beauty of the place and those green meadows were amazingly beautiful.

Shangarh is a beautiful village in Sainj Valley of Kullu district in Himachal Pradesh. It’s a natural wonder hidden in the lap of Himalaya in Great Himalayan National Park (world heritage site listed on UNESCO) eco zone in Sainj Valley. The Sainj valley begins from Larji, a small village nestling on Aut‐Larji state highway at the confluence of the Beas and its tributaries. Shangarh hosts a giant lush green meadow surrounded by dense deodar forest and the majestic Shenshar, Banaugi and Stogni ranges in the backdrop.

As we started early in the morning, we were super hungry and wanted something to eat. We moved towards the local dhabas that we saw while driving up till the meadows. The Dhabas serve rajma, rice, roti, sabzi, local dish sidhu, paranthas and maggi; all at very reasonable prices. After relishing on parantha and chai, we decided to head back to the meadows.

We were ready to explore the huge meadows of Shangarh. The primary deity lording over Shangarh village is known as Shangchul Mahadev. On the corner of the most magnificent green grasslands stood the three-tiered Shangchul Mahadev Temple which caught my attention. There are also smaller shrines located at various corners of the open meadow. The complete area was so clean and green, I was amazed to see that it was devoid of any stones. And there is a story behind it…

Locals say, many thousand years ago during the Mahabharata times, the pandavas came here during their abandon period. They made the Shangarh meadows by purifying the soil to cultivate rice. This is the reason you do not find any kind of stone in this area.

After pandavas left, demons settled in this place who were said to be destroyed by Shangchul Mahadev from kinnaur who henceforth owned the Shangarh meadows.

There was a newly built wooden enclosure at the beginning of the grassland and it is said that this place was the resting place for the devtas. All the temples have intricated wooden carvings depicting various mythological scenes. 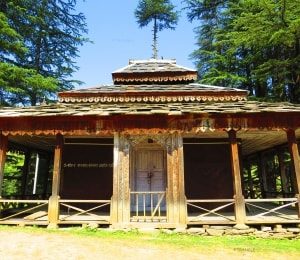 The main temple is in the village and can be clearly scene from the meadows. After spending some time, we started to move across the field towards the village. Within few minutes we reached the temple, which is built amongst other traditional buildings.

The main door of the temple was the grandest door that I have ever seen. A beautiful idol of Lord Shiva was placed inside the temple. Generally, the door remains closed, however we were lucky enough to get the darshan. 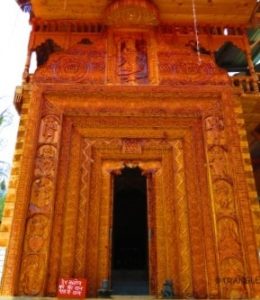 After having spent some quality time with the villagers, we decided to head back to our home. We were happy and thrilled to have spent the day so peacefully. We will return to the place soon to trek to one of the most beautiful villages as Shangarh also acts as a basecamp for numerous treks in GHNP.

Shangarh is quite accessible round the year by a motorable road from Ropa.

Take a Kullu- Manali bound bus and get down at Aut. Board a bus to Neuli via Sainj. From there its is around 10kms. You can get a shared cab towards the village or if you like hiking, go ahead with it.

There is also a HRTC bus from Kullu to Shangarh.

From New Delhi, Shangarh is about 520kms

The summers are the easiest to reach. Winters being too cold makes it a bit difficult. But I’m sure the snow cladded mountains during the winters will have its own charm.

There are some homestays very close to the Shangchul Mahadev temple. One can also consider the GHNP guesthouse just before neuli.

3 thoughts on “Shangarh – A Hidden Jewel in Sainj Valley”