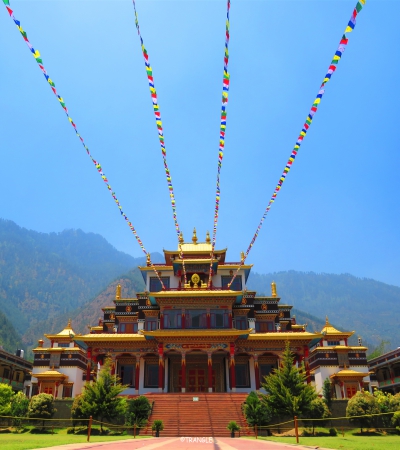 I have always been fascinated with the very rich Buddhist and Tibetan culture and loved visiting monasteries. My love for them grew stronger when I got a chance to visit some of the most beautiful monasteries in the world during my trip to Tibet. It is also said that Gongaar, Tibet is the place where lies the source of lineage which lead to more than three hundred monasteries in the world.

I was in Tibet for a Mountaineering expedition. After it got over, our team got a chance to explore the towns/cities/villages of Tibet, and I must say I was blown away with the beauty and charm of the monasteries I visited there; Potala Palace being one of them. Potala Palace in Lhasa, Tibet is the largest monastery in the world and is listed in the UNESCO’s world heritage site.

After returning to India, whenever I got a chance to visit the monasteries I just grabbed it. My love just grew stronger. The vibrant colours of the gompas, the peaceful atmosphere of the prayer halls, the beautiful and attractive thangka paintings, the discipline and the mindfulness in their teachings, the bells tolling and the spinning of the prayer wheels, the fluttering of prayer flags… everything just seemed perfect to me, a pure cultural and architectural delight. 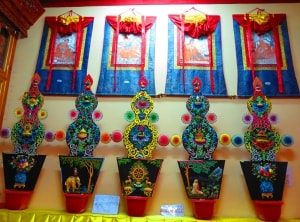 Dhakpo Shedrupling Monastery, also known as Kais Monastery, is situated in Kais Village of Kullu District. It is located at 31 kms from Manali, 10kms from Kullu bus stand and 12 kms from Naggar. Located on the left bank of Beas River, this monastery was inaugurated in May 2005 by his holiness Dalai Lama. This monastery is a popular destination amongst the people because it offers the most picturesque view of the surrounding valleys.

Beautiful Paintings and murals adorn the walls and some of the most magnificent sculptures add to the beauty of the gompa. It has a huge Buddha statue and it also serves as a boarding school and university for the study of Buddhist Philosophy.

This monastery is situated in Sarabai village which is located at 53 kms from Manali, 14 kms from Kullu bus stand and 5kms from Bhuntar. The mother monastery of this mahavihara lies in Tibet, the great Druk Choekhorling Gompa of Lhasa, which is said to be built in the 16th century.

“Dharma Abode of Great Bliss” is what it denotes.

Situated on a hill top and surrounded by the majestic mountains, this monastery offers a commanding view of Kullu Valley. One can also catch a glimpse of the majestic Bijli Mahadev Temple from here.

I was awestruck with the breath-taking views of this place; the sun rays greeting the colourful walls of the monastery made it look even more beautiful. 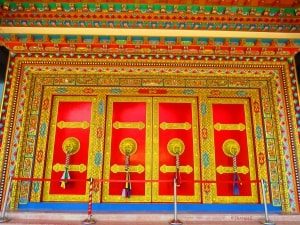 The main entrance of the gompa features the traditional wheel and deer emblem in gold colour. The main temple complex consists of a gigantic statue of Shakyamuni Buddha, which stand 31 ft tall and the statues of Ringpoche Padamsambhava and Green Tara which are both 21 ft high. It is said that the construction of this gompa started in the year 2000 and it took almost nine years to complete the main temple complex.

I was getting mesmerised with the chanting of mantras and the soothing sounds of the instruments.

I stepped inside to see that the monks were chanting those mantras and were offering their prayers to the lord. Their monthly prayer session was going on. I decided to sit there quietly to witness the entire process. The monks had divine expressions on their face and soothing smiles. Their expressions were clearly conveying that peace, kindness, love and compassion is a daily practise in their lives.

I too wanted to be myself and think nothing. Where I can let the conscious meet the sub conscious. The echo of mantras made me feel so comfortable that I don’t remember closing my eyes and submitting to the aura. I was letting go of every thought that was bothering me.

I realised that peace does not mean a place where there is no noise or trouble, it means to be amid those things and still be calm in your heart.

These monasteries definitely warrant a visit. So, when are u visiting?