Work keeps you busy. I was in Naggar with my friend from last two weeks but this time we really got caught up so much in work that we couldn’t visit Manali from Naggar even once. Phew!!

On a bright morning, after having breakfast we decided to head for Manali. We started our drive and happily drove till Aleo. The actual issue began here only. There was a heavy traffic jam and a long queue of vehicles on the road. I guess they too liked our idea of visiting Manali and were there before us.

After waiting for almost an hour and observing that the vehicles were not moving even an inch, we decided to drop the plan and return.  As we reached Shaminallah which is around 5kms from Manali, we took a left turn and it lead us to a beautiful village called Shuru.

We stopped our car and decided to take a break. We were busy clicking pictures and I heard someone say “Namaste!”… A pretty lady was standing next to me with a bucket in her hand. She was there to fetch some water.
“Namaste”, I said.

“Mandir se aa rahe hai aap?” (Are you coming after visiting the temple?) She asked.

“Ji, nahi toh. Kaunsa mandir?” (No. Which temple are you talking about?) I said.

I thanked her and along with my friends started walking towards the temple. After a walk of approx 15 minutes we reached the temple.

The temple offers sense of peace and serenity and is surrounded by beautiful deodar trees.
The name of this temple is derived from a caste of people named ”Shavar” who lived here in the ancient times. Famous for its unique architecture and religious value, this temple is dedicated to the Kuldevi of the Kings of Kullu in early times and is worshipped as a manifestation of Durga. The Goddess is worshipped as a girl child here. During the dusherra festival, the goddess is transported to Kullu to visit Lord Raghunath ji. 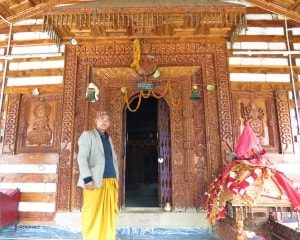 The Pandit ji of the temple was very welcoming. He allowed us to sit there for as long as we wanted. Other than the main entrance, there is a small gate inside the temple, the idol of the Goddess is also enshrined here. No one except the Pandit ji is allowed to enter this gate. He told us that this small gate is opened for the general public only for a day prior to Shivratri.

A path from the backside of the temple leads you to “Arjun Gufa” or “Arjuna Caves”. It’s a small hike of approx 30-40mins. It is believed that this is the place where Arjuna  meditated to earn the powers of Pashupati Astra or weapon from Lord Indra. The way to enter inside the “Gufa” is blocked by huge boulders as a result of landslides over the years. The caretaker told us that the Gufa used to accommodate at least thousand people before. Because of its mythological significance, the temple and the gufa attracts a lot of tourists and holds great significance amongst the locals.

After spending our day at this beautiful place, we decided to head back to Naggar.

It was indeed a day well spent!